“Now that design thinking is everywhere, it’s tempting to simply declare it dead…”

So wrote Tim Brown in this issue of Harvard Business Review. I read it with sinking heart.

Tim Brown is the CEO and president of international design consulting firm IDEO and the author of Change by Design. He last wrote on design thinking in that same publication in 2008 when the phrase was just becoming anchored in American management vocabulary.

It took a decade to get from:

When Everyone is Doing Design Thinking, Is It Still a Competitive Advantage? (HBR, 2015)

That just goes to show how quickly a business trend can flip from cutting-edge to passé. But real cultural change takes a lot more time than that.

During these 10 years, I’ve been pushing the design thinking rock uphill in five separate organizations, proselytizing for internal culture and methodology changes that I always believed did indeed represent a competitive advantage.

Sometimes my evangelization has been well-received and sometimes it’s stuttered and stalled, but never once has the process been linear nor I have ever once felt: “That’s it. We did it. We are really good at this now.”

This is even true at my current company, Maker Media, which is the leading advocate of the Maker Movement whose growth reflects and parallels that of design thinking.

So I was relieved to keep reading:

“Design thinking is a set of tools that can grow old with us. And I’d argue that in order to create sustained competitive advantage, businesses must be not just practitioners, but masters of the art. Adapting from William Gibson, the future of design thinking is here, it’s just not evenly distributed.” Tim Brown

I’m too old to start my career over as a private detective, which was always my back-up choice. So I’m happy to be given permission to keep pushing my rock.

But this “uneven distribution” bit does make feel a bit weary.

Brown’s argument is that organizations must achieve “creative mastery” to really capitalize on design thinking as a competitive advantage; short of that, says he, end results “can be incremental and short-lived.”

I have to admit that this has mostly been my experience: I’ve had projects that were successful because of the end result and projects where the process held close to the ideal and projects where I was proud of both the outcome and the process. But I have yet to be able to sustain a management team’s initial enthusiasm for the design thinking process.

It’s not so much that there is resistance to the principles; it’s always simply a question of taking too long, especially in media companies where there is nearly endless capacity for adding more ads and shortening the sales cycle has an immediate effect on the bottom line.

It turns out that Brown’s article served mostly a plug for new design thinking courses from IDEO U. What he really meant was not that design thinking is dead, but that we need to work harder on mastering it and integrating the process across the organization.

But even as the vocabulary and methodology of design thinking are visibly spreading across the larger American management culture, one of the dangers is that the ideas are being imprecisely applied by people who are just using the latest buzzwords.

I’ll just point to one of my personal pet peeves: “design thinking” is not “design” nor is “design” a solution in itself.

It is easier now than 10 years ago to procure budget for design. “Visual designer” and “interaction designer” are now among the hottest technology job titles. (In that same HBR issue, Jon Kolko reports that IBM Global Business Services plans to hire 1,000 designers!)

This is wonderful: those guys are my buddies and I’m happy for them.

But even while an amazing design is usually part of the desired outcome — it’s rare for a team to set out to create something ugly — design and user experience are not quite the same thing. In fact, not only does the process not need to be lead by a designer per se, but design should come at the end of the process. 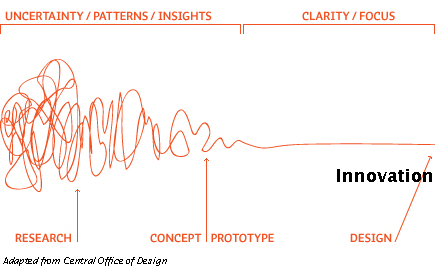 The design thinking process according to Linda Naiman, founder of Creativity at Work.

While designers themselves usually understand this, executive teams often do not. They hear “design thinking” or “user-centered design” and want to see pretty pictures right off the bat. The result can be slick but off-target designs that end up distracting from the real goal of design thinking: products that reflect a real understanding of the emotional and practical needs of the user.

I’ve had this experience with several CEOs, including one who came from a product management background and really should have known better. The memory still irks…(I’ll acknowledge that I express this thought partly out of jealousy. At the same time that the rise of the blogosphere and user-generated content have undermined the value tied to content creation –and, yes, I mean how much we word-people get paid — the designer has risen to the top of the strategic ladder.)

Still, if you work anywhere on the UX team, this is a better problem to have than for the executive team to be designing their own websites, which is what I found at Dice in 2011.

I’m happy to keep pursuing Brown’s “creative mastery” of design thinking, both for myself and the companies where I work. After all, design thinking should be the ultimate kaizen discipline, one that demands continuous improvement and succeeds by never letting you get too comfortable.

"Why"? How I Learned to Love This Question More Than "Why Not"?